Google informed that Core Search Algorithm Update, which was started rolling out on 1st August, now has been completely rolled out. This fact has been verified by Google Search Liaison Danny Sullivan on Twitter.

In reply, Liaison Sullivan said on Twitter“It’s done. That said, we always have changes that happen, both broad and more specific”. 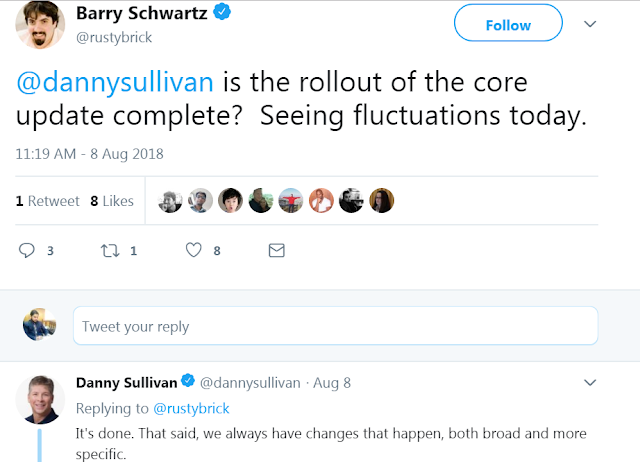 The Google 1st August Search Algorithm update was based on research. Such updates happen only times in a year. Like in 2018, only three major broad core algorithm updates released by Google. First two updates were released in March and April and this third one released now in August.

The algorithm update seems to like an advice to Webmasters to bring some technical changes to their websites. Furthermore, it is emphasized on content quality to bring improvement in the search results.

Google is always on a mission to provide quick, better, accurate and desired results to users. That’s why Google emphasizes on Webmasters to create content as per expectations of the user. Google says that when you are creating content, keep in mind the search query of a user to provide a happiness to a user. So such algorithm updates are part of that mission and provide metrics to webmasters to bring such changes in their websites.

Now when Google August Search Algorithm Update fully rolled out, you can check either your site badly affected or left a good impression for your site.  Remember! Update in Algorithm Search can happen anytime. Sometimes it comes after months and sometimes comes only with a distance of 10 to 15 days.

What Is Project Resource Management?