The more sensitive and shocking point is this that “data was given access to third party during the U.S Presidential Election Campaign of 2016. From this, it clearly reveals that how much social media affected and impacted on the US 2016 Presidential elections.

According to Whistleblower, Cambridge Analytic a collected 50 million user’s data. After collecting this data, a software was developed that profiled these users to foresee the voting patterns. Bear in mind that 50 million figures were admitted by Facebook Administration and its owner, but it could  be high up to 87 million. 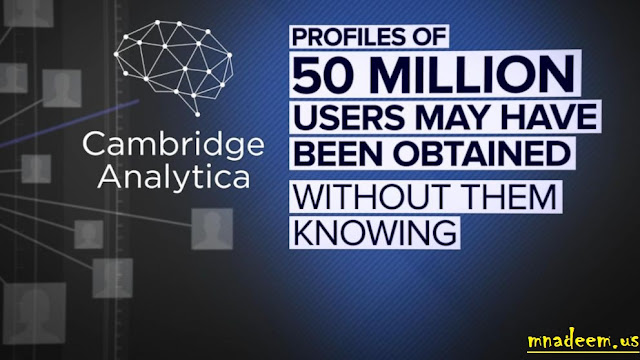 
I started Facebook, and at the end of the day, I’m responsible for what happens on our platform. I’m serious about doing what it takes to protect our community.

He further stated that:


Facebook has a “responsibility” to protect its users’ data and if it fails, “we don’t deserve to serve you.

He acknowledged that there is more the company needs to do. Mark Zuckerberg said:


…But we also made mistakes, there’s more to do, and we need to step up and do it.


What Are You Sharing?

Similarly when you open another app like Quiz app, personality test app, future telling app, your best friends app etc., the app request you to give access to your friends list and basic profile information and you click on “accept” button without considering this that why an app need to know your school name, list of friends and other basic information? These apps included Dropbox, Etsy, Feedly, CNET, change.org, Canva, Bookish, Bandcamp, Adobe etc.


How to Disconnect Apps

Go to App Setting of your page to check that to how many apps you’ve given permission to access your data. It would be appalling and dreadful for you that how many apps are listed there and those apps are using your data with your permission which you give them.

When I checked my FB profile and visited the app page setting, there were nine (09) apps were listed which I permitted. You can also see check on your Facebook that to how many apps you’ve given permission to access your data.

Next, click on any app to see that what information you are sharing to the developers of that app. However you can stop the access of all those apps to your account to keep your data safe and secure from any third party source. You can also stop those sites to share your data.

The precise and accurate choices presented as you click an app will rely on developer of app. occasionally you’ll be capable to outlook a complete privacy policy, but it’s not compulsory in favor of developers to provide one. If you agreed to an app and granted authorization to post to your wall, eliminating it will provide you the option to delete those posts

Remember! If you removed an app from your Facebook account, the developer may even then have your data on file. Facebook says that the single method you are able to remove this is to get in touch with the developer of the app yourself.

Be Careful in Future

To permanently stop your Facebook data to share with third party, select “edit” under “Apps, websites and plug-in” and disconnect your FB account from those sites, apps, services and plug-in on permanent basis.

In future, whenever you give access to any site, app or plug-in to your Facebook account, check that either the information of your account requested by that app is really worthwhile for it, is it relevant to that app or for what purpose it is requesting to get access to your account. Otherwise in 2020 US Presidential Elections, your profile may again be used for electoral voting.